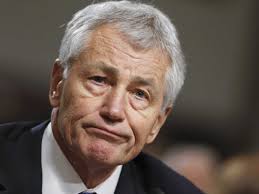 On 24 February 2014 US Secretary of Defense Chuck Hagel held a press conference to announce some of the details of Pentagon’s 2015 budget. Beyond the news of cuts in warfighting machinery and personnel–and the pox of “irresponsible” sequestration on the federal government–Hagel made a point of indicating that the world is becoming an increasingly volatile place. He also seemed to express a bit of disgust for nation building of the type attempted by the USA in Iraq and Afghanistan.

Those sentiments are directly at odds with the core element of US national and global security strategy in operation since the late 19th Century. Those strategies employ the USA’s considerable instruments of national power to: 1) actively destabilize “elected” governments (Ukraine, Venezuela) through the use of NGO’s, intelligence agencies and proxy groups; 2) prop up brutal regimes (Bahrain, Saudi Arabia, Egypt) through a US congressionally approved program, executed by the US military, called Foreign Internal Defense; 3) information operations conducted via the printed press, social media, radio, television and film that seek to shape the cognitive local to global environment in favor of US national interests.; and 4) existentially destroy foreign governments through direct military action in conjunction with the weaponry of finance capitalism to create new markets.

All of this is codified in one form or another in US political and military doctrine. Every American president from George Washington to Barack Obama has trumpeted in some fashion what President Obama and President Bush George W, Bush both proclaimed. The former indicated that the US will pursue its own interests no matter what any other nation on the planet thinks, even invoking God’s plan to put the care of the global environment in America’s hands. The latter put it more simply, “You are either with us or against us.” The heads of foreign governments—and their opponents– are well aware of US strategy, tactics and operations.

In the middle of this sits the US Department of Defense and the military branches of the US government. While they certainly advocate for their budgetary interests, have their share of drunks, overstep the civil-military divide, and engage is occasional battlefield atrocities, the fact is that they take their guidance and instructions from American civilians who are elected and appointed to provide the guiding strategy—and funding–to which the military designs its own strategy, tactics and operations.

So as Chief Executive Officer of the DOD Chuck Hagel was announcing austerity measures for the DOD corporate dominion with the closure of unneeded facilities (think factories), personnel (think workers) and benefits (think pensions and health benefits cut for all but generals, admirals and senior government executives), the thought arises that in a dozen countries large and small around the planet, American civilian leadership is either agitating directly or indirectly for the destabilization of those foreign internal governments, or supporting brutal regimes for strategic ends. If these largely economic-based rebellions begin to spill over into neighboring countries–or cause neighboring country leaders to mobilize or put military troops on alert; as in Russia (who can blame them?), then why is American civilian leadership forcing the US Navy, Marine Corps and Army to shrink in size and cut costs?

And with the much ballyhooed pivot to Asia, how much sense does it make cut back US ground forces in the face of a potential adversary (China) that can field at least 300 million soldiers and insurgents? Additionally, and most importantly, why is the US civilian leadership destabilizing its own country by rapaciously cutting an array of federal social programs (food assistance programs and health benefits for example) for its own people, just as corporations hoard cash, pay little taxes and reap increased dividend payments?

Demonstrations the world over are underway not for some nebulous concept of freedom and democracy but rather because mercenary privatization IMF style and messy capitalism are ripping asunder their target societies as prices for water, rent and food skyrocket with no reasonable safety nets established. And when the populace is life-insecure, the nation’s stability is threatened. If it is not the capitalists then it’s the dictators and their minions who seek to fill their bank accounts with cash for the day they are booted out of power. And yet free market and expeditionary economic cheerleaders are the first ones to turn to the State when profits sink which means no one wants to buy what they are selling. Then there is that pesky violent history from the mid-19th to the 20th Century. If the idea of war is to create a better, long lasting peace, as someone once said, are we setting up for a third world war, the trifecta that ends all wars?

The combination of financiers, investors, technocrats and politicians is toxic. They run the world with formulas and a market ideology that has long since past its prime. They simply write off as “bad debt” large swaths of world’s population—to include in the United States and European Union—as unemployable, uninsurable. Once they have jettisoned those millions from the official economic figures, the economy magically improves as investors get excited. They claim that taxes stifle corporate investment when, in fact, corporations pay very little taxes thanks to politicians. Incredulously, they seek a move to the free market in a time of growing poverty, inequality and unrest.

Ukraine, Thailand, Venezuela, Egypt, Syria, Iraq, Afghanistan, Cambodia, Libya, Mexico (?), Chile, Spain, Greece and Yemen are just a few of the countries with populations unhappy with economic conditions ranging from factory closings, low wages and high unemployment. A good lesson for Americans is the plight of one of their own, Detroit, Michigan.

As a placard in Bosnia Herzegovina put it, “I am hungry in three languages.” So when global rebellion comes in dozens of languages–based on the simple desire for the “right” to be secure in work, food, shelter and clothing–spills over to one country after another–to include the USA–the financiers, investors, technocrats and loathsome politicians will turn to the American national security apparatus to protect them, most likely by fighting in a foreign land already in the midst of a civil war or open rebellion. Hagel should say No.