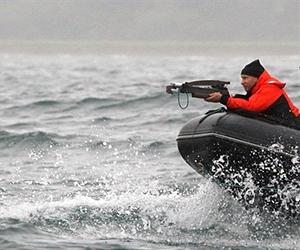 Russian Prime Minister Vladimir Putin spoke of his passion for fishing and extolled the virtues of the outdoor life in an unusual interview with a US hunting and fishing magazine published on Wednesday.

“I value more and more what sport has given me, the habit of a healthy way of life, and the opportunity to be in the countryside,” Putin, once famously photographed fishing with a muscle-bound naked torso, told Outdoor Life magazine.

The interview was published in full in the original Russian in the Russky Pioneer magazine, where Putin writes an occasional column.

“As for fishing, it is close to me and I love it, and I always make use of unfortunately the very rare opportunity to sit with a rod,” said Putin, whose last public fishing outing was with Italian counterpart Silvio Berlusconi.

“It’s true work sometimes helps. How else would I be able to fish in America and what’s more in the company of two presidents?”

Asked about whether it was appropriate for a president to be photographed in outdoor pursuits, Putin says: “I remember well a photograph of Theodore Roosevelt, on which he is shown not simply with a gun or a fishing rod, but with a lion he killed himself.”

While the magazine covers hunting and fishing, Putin is avowedly not a hunter, unlike Soviet leaders such as Khrushchev and Brezhnev.

“I am not a hypocrite and I think that hunting as a leisure pursuit has the right to existence, but only in certain cases, when it is properly regulated and when the animals are able to regenerate,” Putin said.

Putin has taken part in expeditions to tag a whale and a Siberian tiger, as well as heading the Russian Geographical Society, in an interest in ecology that burnishes his action man image but also appears heartfelt.

Putin gave an interview to Outdoor Life magazine, in a quirky choice of media outlet, after a columnist called him “the coolest man in politics.”  -AFP