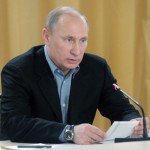 Russian Prime Minister Vladimir Putin, who is running for a third term as president, has told foreign journalists he will not impede political reforms amid opposition fears of a tougher political system if he wins the March 4 election.

Top media bosses grilled the Russian Premier on a number of key issues on Thursday, his attitude to reforms already set in motion taking center stage. The opposition has raised concerns that he may put a dampener on political progress.

“Why should I do it? On the contrary, President Medvedev submitted a package of bills that liberalize our political system, lowering membership requirements for new political parties” Putin said. He added that he does not know where such fears originate.

“We are doing the opposite. Nor do we plan anything of the sort. All our proposals aim to promote dialogue with those who support us and who criticize us.”

The Prime Minister also commented on one of the opposition’s key demands, promoted during several rallies in Moscow and across the country: having an early parliamentary vote, due to allegations of fraud in the December election, in which the majority of seats went to the ruling United Russia party. Putin said an early vote is out of the question.

“No, there is the election time stipulated by legislation,” he said.

Putin said that he had taken on board opposition demands and regards the current protest movement as “a very good experience for Russia.” However, he flagged the opposition movement’s labeling of the ruling United Russia party as “crooks and thieves” as counter-intuitive.

He highlighted the fact that many of the political figures behind the criticism were high-ranking officials who had participated in privatization and drafted laws.

“So far they have not advanced any interesting, well thought-out steps for developing the country,” he told foreign journalists.

­Putin also stated that the decision that he would run for the presidency in 2012 was made together with the current President Dmitry Medvedev as late as the end of last year, before the United Russia congress at which Putin was announced as the candidate for president.

He added, though, that the principal plan was agreed upon four years ago.

“Medvedev and I agreed that if the results of our partnership are positive, and if the opportunity for one of us to become a presidential candidate should arise, then we would take it,” the prime minister noted.

“It was clear at the end of last year that yours truly was polling higher than Medvedev” he explained. Putin also said that they – being representatives of one political force – should show solidarity in these circumstances, and avoid showing personal interest in any particular position.

“We estimated who had a better chance, would be granted the citizens’ trust, and would be more likely to win and continue the program for Russia’s development”.

­He also confirmed that if he wins, he will offer the position of prime minister to Medvedev, stressing that he does not see any signs of “political oligarchy” in such a move, though some Western media have labeled it as such.

“What is unusual about that? We are speaking frankly and clearly to the country, suggesting that [sic] this particular citizen would run for the top job and announce in advance that in this case Mr. Medvedev will be offered the position of prime minister. Have we cheated anyone? Have we hidden anything? No, we came up to voters with this proposal openly and honestly and are giving the citizens an opportunity to express whether they agree with this suggestion or not.”

Syria ‘cannot be solved by siding with only one party’

The premier voiced his concerns over the conflict in Syria and appealed to the West to pressure the opposition into dialogue with Assad’s regime, stressing that the problem “cannot be resolved by siding with only one party.”

“We propose demanding all parties in the armed conflict immediately cease fire and sit down at the negotiating table to begin dialogue about political reforms. Working with the opposition is necessary. If you just encourage them with arms supplies and pressure on [President Bashar] Al-Assad, they will never agree to negotiations.”

He also flagged up potential pitfalls in the UN Security Council resolution on Syria, saying that it only called for withdrawal of government troops from the cities they occupy. He stressed that then “the opposition should also withdraw its forces” as part of a balanced resolution to the conflict in Syria.

He also stressed that Russia wants no armed conflict in connection with Iran.

“We will be doing everything possible to prevent armed conflict in Iran or around it – if it happened, it would have direct, negative consequences for us. Unfortunately, this is a very explosive region. We always treated negatively any militaristic statements in this region. During direct talks, we also condemned any anti-Israel statements of our Iranian partners. Our position on the issue is unchanged.”

“We believe it correct to give Iran an opportunity to develop its peaceful nuclear program, of course, fully controlled by the IAEA.”