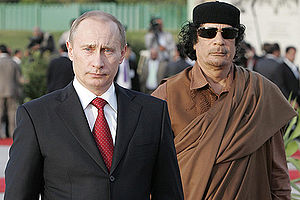 The way decisions on the use of force are made almost at the drop of a hat is worrying, Russian Prime Minister Vladimir Putin said on Wednesday, referring to the situation in Libya.

“I don’t think we can equate Serbia with Libya,” Putin said responding to a question about the lessons that the international community had drawn from the 1999 events in Yugoslavia.

“However, I am concerned by the ease with which decisions have been made in recent years to use force in international affairs.”

Putin’s latest comments offer no indication of any disagreement with President Dmitry Medvedev after the latter snapped at him over his Libya remarks on Monday.

Putin likened a UN Security Council resolution on the imposition of a no-fly zone over Libya to “medieval calls for crusades.”

Under the Russian Constitution, the country’s foreign policy is formulated by the president, not the prime minister.

Western-led military strikes against Qaddafi, who has been ruthlessly fighting rebels in the North African country since mid-February, began on Saturday.

Libyan television has reported that at least 60 civilians have been killed and over 150 wounded in the strikes and that many health and education facilities have been destroyed.