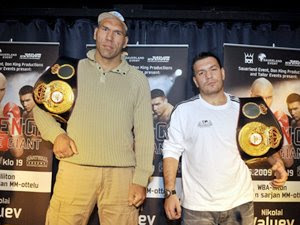 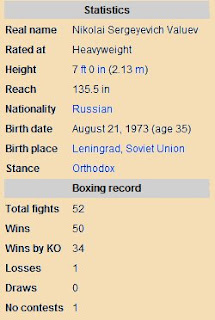 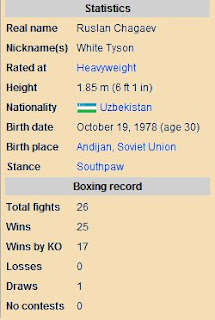 This is the news of the day! (Well almost)

This Saturday (5-30-09) in Helsinki, Finland, will be the rematch that will settle the debate all over the world about who is the real champion between these two guys!

Valuev (The Russian Giant) is looking for revenge after a disappointing loss in 2007 to a smaller and faster Chagaev!

Valuev who is one foot taller and much more powerful is the slowest of the two. Chagaev seems to have greater boxing skills and definitely speed that may help him take the WBA belt back.

Little known fact about Valuev: In May, 2009 Nikolai Valujev killed a Wild Boar with his bare hands when the animal attacked his dog during a hunt in the area of St Petersburg, Russia.

Now that is cool…

Update: Due to so far unofficial reasons: The WBA heavyweight fight between Russian Giant Nikolay Valuev against Uzbek White Tyson Ruslan Chagaev has been called off by Finnish organizers.

Officials said that “Chagaev has been unable to fulfill the Finnish Boxing Federation’s medical requirements.” However, the organizers refused to give more details of Chagaev’s condition as it is against Finnish law.

Finnish media have unofficially stated that Chagaev is suffering from a hepatitis infection. All 11 boxing bouts scheduled for the evening have been canceled.