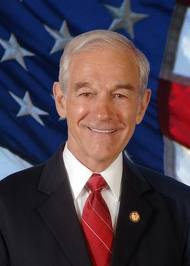 Ron Paul, among Republican Party Candidates for 2012 US Presidential elections, is the American for real change. Reminding the world of virtues which had made USA a model for the world in yesteryear’s. Like many Great Americans, he is honest, brave, smart, honorable, generous and futuristic. Ron Paul a suave politician reminds folks of the American Revolutionary Spirit of 1776. Of the courage to stand up for truth, challenging conventional wisdom and chiseling a pragmatic road map for the future.

Cognizant of the fact that Neo-con led decade of 2000-2010 had ruined America, he advocates Neo atonement and redemption. As a patriotic American, he knows the good hearted people of USA were again being led astray by the pied pipers cabal of Globalists, Military-Industrial Complex and Neo- con remnants. This time the issue is more serious than declining at home and being over stretched abroad. If the War Lobby-cum Globalists have their way, they may drive USA into a World War (as a Ron Paul supporter, Benton exclaimed. ‘We need another armed conflict, like we need a hole in the head!)

Attacking Iran or Pakistan will be crossing the Rubicon. Putin had even earlier reportedly told his Generals ‘Prepare for Armageddon!’ Now after alleged interference from the west in Russian Politics has been termed as ‘an act of war’ by some Moscow Quarters (Imagine the mood in the Kremlin). The Chinese Navy was recently put on high alert by Beijing. Russia – China had coordinated their stance on Syria, to block the NATO onslaught. War beyond Syria, into Iran and Pakistan will spiral out of control regional war – Nuclear World War.

All this is taken into account by Ron Paul’s Geopolitical vision. He vehemently believes that the world does not need more wars. He also bravely accepts that one of the Nations which need rebuilding is called ‘United States of America’. His foreign policy is not simply isolationism, but of reducing Washington’s’ insatiable appetite as the Global Police Cop. He understands like many smart Americans do that USA can lead the world through its soft power, without recourse to hard power, or aggressive wars. (No matter how they are sugar coated, or made palatable on the basis of ‘American Exceptionalism or more recently ‘Terrorism Lexicon’)

Ron Paul and his supporters understand that even after building one aircraft carrier, the Chinese will face eleven US Carriers in the oceans (and bigger ones of Carl Wilson, class). They also remember that America won the decisive naval Battle of Midway, Second World War, with two aircraft carriers while sinking four Japanese Carriers, turning the tide in the Pacific. Even if Iran, builds ten nuclear bombs, Israel has hundreds and America can deploy thousands of nukes. Besides in high- hyper tech war no one match USA. No State Actor can hope to get away, after attacking America. The only Non State Actor Al-Qaeda is on the sights of US military power since a decade for this attempt. With two oceans for safety on the flanks, soft neighbors in the North and South, the USA has no one to fear- Except Itself. (Going overboard in its endless foreign wars, amidst a dwindling economy at home)

Ron Paul’s stance is based on courage and hope, not ‘instigated fear’. Historically USA would never have become such a great Nation without these virtues. From the ‘May Flower sailing to New England, the Thirteen Colonies seeking Independence, Boston Tea party, Lexington, Bunker hill, the star spangled banner, till the fall of Yorktown, the declaration of Independence was all about American Courage and Hope.

With fluctuations, this continued till the Cold War. Ironically after American Victory in the Cold War (termed by Francis Fukuyama as ‘End of History’) the ‘Fear Factor’ set in. Paul Kennedy had termed USA as a declining power (rise and fall are natural, as no nation can keep rising for ever). Still fear of America’s decline, or greed for foreign conquests, (corporate led) has made the ‘fear factor’ predominant in US Politics – Geopolitics. The last decade saw the ‘terrorist fear’ (exploited by Neo-Cons) taken to extreme. Obviously USA had to be made safe from all forms of foreign attacks, by Washington, but without losing balance (In the event the Americans lost their civil liberties, economic progress and are not winning their wars either)

As the American people (despite their diligence) face economic deprivation, the Germans in Europe, and Chinese in Asia are laughing all the way to their banks. The Germans and Chinese are role models of prosperity, (even as Turkey and Brazil join the new rich group). While the Americans are cursed globally for everything which goes wrong! (Due to America’s overextended Global Cop Role, it would be poorer at home and demonized abroad)

Great Americans who have been traditionally smart and futuristic know this is the wrong road. Time to change track! America needs fresh thinking –A New Narrative.

· Bringing US troops back home from Iraq, Afghan Wars, rather than starting new wars.

· Solving the Iran issue by means other than war.

· A relatively non interventionist stance in over all US foreign policy.

· Improving the lives of Americans at home and raising their prestige abroad. And a lot more!

(Many US war veterans having seen protracted and futile war at close quarters support Ron Paul) The Ron Paul theme is current, and populist. A radical thinker, albeit too radical for Republican tastes. Before Ron Paul contests the Democratic Party and President Obama, he has to match his own party mates. His concept for America is sound, the question –‘Is USA prepared for him’? Is the Ron Paul idea whose time has come? Or is he ahead of his times! Historically the Americans were revolutionaries in infancy, then turned conservative and now may see revolutionary cycle again.

After the First World War, the Americans became isolationists again! Isolation in American parlance however today has an entirely different context. Post First World War, when US GIs returned home it was 1919-1920 onwards. Today almost nine decades later a global world is an economically integrated world. It is US Geo-strategy which needs to be truncated and re chiseled not Geo-economics. America’s economic relations with Germany or China and the rest of the world would grow and not be curtailed, by saying good bye to new, unwanted wars. A new era of peace and prosperity can be ushered. America can grow rich, strong and prestigious even without the military- industrial complex going in overdrive! That is the new idea!

Ironically Ron Paul is feared by fellow Republicans and assailed by opposing Democrats. Both the Elephant and the Donkey (the two party symbols need a new rider. The American people have to decide who that will be) Ironically it is already being said that US Presidential Election 2012 is boring, routine and uninspiring except for Ron Paul (of course this may not be true).

In the mean while, new radical thinking against the elite, or unbridled capitalism has also seeped in. ’Occupy Wall Street, LA’ etc though it still a minority. Will this become a tidal wave? Meanwhile US elections-politics is mostly conservative. As one foreign resident of USA said – ‘If they do not elect Ron Paul then God help America!’

Many great Americans did not become the President of the United States, but they stands tall, their stature undiminished. Ron Paul may then be one of them!