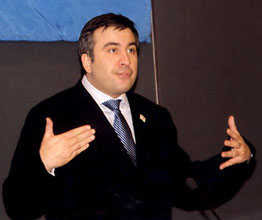 The second cup of coffee brought my attention to: One of the oldest and most respectable U.S. newspapers has published an article on the political situation in Georgia following the South Ossetian crisis. According to The Washington Post, “Georgians inside and outside the government have begun to question the wisdom of the costly confrontation, and of the leaders who set it in motion”.

Title of Article: Georgians Question Wisdom of War With Russia, President’s Future At Stake, Some Say! (Link: you must sign up)
By Tara Bahrampour
Washington Post Staff Writer
Tuesday, September 9, 2008; Page A12

Initially, questions made by Georgia’s opposition to Saakashvili were raised quietly. Now they are growing louder and louder. While Russian peacekeepers are still in Georgia, some opposition leaders have spoken out about what they call ‘failures in diplomacy and warfare’, claiming that Saakashvili’s own actions have damaged his standing in Georgia.

Others predict Saakashvili, who reclaimed South Ossetia and Abkhazia back in 2003, will be forced from office by a war he hoped would earn him a place in history.

“Through military force, and all kinds of provocations, Saakashvili tried to show that he had the ability to reclaim these territories”, said the leader of the opposition New Rights party David Gamkrelidze to The Washington Post.

Saakashvili is blamed for not having a clear outlook on the situation due to the information provided to him by ‘his small circle’ of intimate followers.

Though an anonymous official quoted by the Post predicts that Saakashvili will be out of office this very year, the president himself is convinced that he will survive this crisis politically.