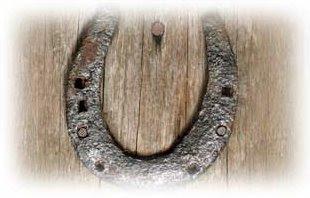 In the USA the horse shoe points up to keep good luck from draining out!

Customs & Superstitions are much alike and it could be an argument as to which are customs and which are superstitions! I will let you decide…..

* Before leaving for a long journey the traveler(s), and all those who are seeing them off, must sit for a moment in silence before leaving the house. It is often conveniently written off as a time to sit and think of anything one may have forgotten.

* After someone has left the house on a long journey, their room and/or their things should not be cleaned up until they have arrived.

* Knocking on wood is practiced in Russia as in other countries.

* Breaking a mirror is not considered bad luck in Russia, but looking at one’s reflection in a broken mirror is.

* It is bad luck to use physical hand gestures to demonstrate something negative using oneself or someone else as the object. For example, when describing a scar you saw on someones face you should not gesture on your own face or someone else’s. If you must, you can demonstrate in mid-air.

* If one person accidentally steps on another person’s foot, it is common for the person who was stepped on to lightly step on the foot of the person who stepped first. It is said that they thus avoid a future conflict.

* Birthday parties should be celebrated on or after one’s birthday, not before. So when one’s birthday falls during the week, it’s best to celebrate the following weekend.

* Talking about future success, especially boasting about it, is considered bad luck. It’s better to be silent until the success has been achieved or to even sound pessimistic.

* Returning home for forgotten things is a bad omen. It is better to leave it behind, but if returning is necessary, one should look in the mirror before leaving the house again. Otherwise the journey will be bad.

* Many Russians consider giving sharp objects, like knives or scissors, as gifts, to be taboo.

* Birds that land on a windowsill should be chased away. If they tap on the window, or fly into it (open or closed) it is considered a very bad omen.

* Things bought for a new born baby (such as clothes, toys, furniture, etc.) should only be purchased after the baby is born.

* It is often considered taboo to step over people, or parts of their body, who are on the ground. It is often said that it will prevent the person from growing (if they are not fully grown already). It is better to politely ask the person to move or to find a way around them. If one accidentally steps over a person (or people), it is sometimes standard to step backwards over them.

* Unmarried people should not sit at the corner of the table. Otherwise they will not marry. This mostly applies to girls, and often only young girls. Sometimes it is said that you will not marry for 7 years, making it alright for young children to sit there.

* A purse as a gift requires a little money inside. Given empty it causes bad financial luck.

* A funeral procession brings good luck. But one should never cross its path or it is bad luck.

* A woman with empty water buckets coming towards you is considered a bad omen.

* A group of two or more people should not walk on either side of a tree. They should all keep to one side or the other.

* Bread should only be cut with a knife, not with your hands. Otherwise, it is said, that your life will be broken.

* It’s good luck to trip on your left foot.

* One should never hand a knife directly to another person, as it is said that the two will get into a fight. Instead a person should always place the knife down on a surface, and only then can the other person pick it up. In several cases you can give it directly, but only pointing the sharp end to yourself and making the knife’s handle accessible for the opposite person.

* If one feels that he or she may have been cursed by someone (had the “evil eye” put on them) or just has the feeling of a hostile presence, it is recommended to remove one’s coat and then put it back on starting with the hand opposing the usually used one.

* It is considered bad luck to put keys on the kitchen table.

* If your ears or cheeks are hot, someone is thinking or talking about you.

* If your nose itches, you’ll be drinking soon.

* If your lips itch, you’ll be kissing someone soon.

* If you have the hiccups, someone is remembering you at this moment.

* If an eyelash falls out you’ll receive a gift. If someone finds an eyelash on someone he or she will sometimes let the person blow it away and make a wish.

* If a fork or spoon falls on the ground, expect a female guest. If a knife falls, expect a male guest.

* If a black cat crosses your path, it’s bad luck. People will often avoid crossing the place where it crossed, or will at least wait for someone else to cross it first.

* If you spill salt, it’s bad luck and is said to bring conflict.

* If it’s raining when you leave a place, it means you’ll return, and it is considered a generally good omen.

* If it rains on someones wedding, it means they’ll be wealthy.

* If someone sneezes while telling something, it means he or she is telling the truth.

* If you find a bay leaf in your soup (commonly Borshch) while eating, it means you’ll get mail from someone.

* In Russian superstition if a couple sets a wedding date and doesn’t end up getting married on that date they can not set another date and should not get married as their union will be cursed.
————————————————

I find it interesting that Russians do not consider an open umbrella in the house to be bad luck, nor do they consider walking under a ladder bad luck. When I grew up those two were bad things to do, along with “Step on a crack and break your mothers back!”

What things are the same for you and do you have any different “Customs & Superstitions?”