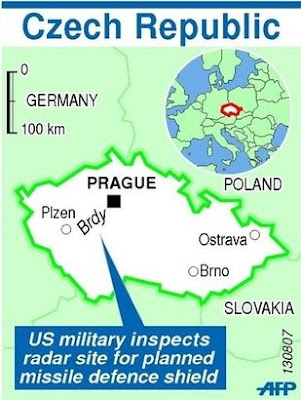 I was drinking my morning cup of coffee & saw that Czech decided to sign away its soul to the USA…..
———————————————–
The Czech authorities calmly signed the agreement although 75% of their people protested it. Poland has not signed a similar agreement to host interceptor missiles only because the sides are still haggling over the price, disregarding the opinion of ordinary Poles.

Europe continues to preach democracy to Russia, although its own democracy is badly in need of repair. When European voters rejected the common constitution, the EU leaders overruled their decision by approving a Reform Treaty, essentially an abridged form of the constitution under a different name.

In short, the implications are bad for everyone, for the United States as the mainstay of democracy, for Europe, and for democracy itself, as well as for Russia, which is only trying to develop democracy. (Link: RIA)
————————————————
I myself consider this a bad omen for the world at large. Everyone is to busy playing in everyone else’s backyards, when they need to go clean up their homes first…..