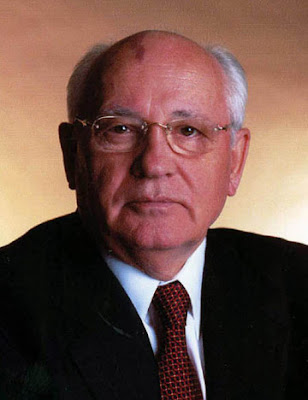 Mikhail Gorbachev was receiving yet another award from the USA. But before he accepted this award he said a statement about Rice’s behavior yesterday at a press conference held before the award ceremony……

The ex-president of the USSR, Mikhail Gorbachev, stated that US Secretary of State

Condoleezza Rice should “use more caution in her call for the West to stand up against Russia, which she said has become “increasingly authoritarian at home and aggressive abroad.”

“I believe that the secretary of state should be more careful and should show greater calm and responsibility for her judgment in calling for the West to unite against Russia,” Gorbachev said through an interpreter at a press conference held before the Liberty Medal ceremony at the National Constitution Center.

Gorbachev made other interesting statements:

“Being unable to find answers to global challenges, politicians tend to use weapons instead. There is nothing more absurd and running counter to common sense,” He also said “There is a shortage of political will and political leadership in the world today.”

You know he is correct…..