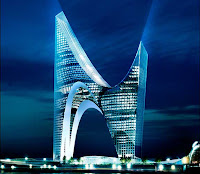 On my second cup of coffee today I was thinking of the controversial and beautiful new architect designs that are being submitted for the Gazprom City, to be built soon. The reason so controversial has to do with the fact that this a long range plan by Putin, St. Petersburg is Putin’s Home city.

This has some St. Petersburg residence in an uproar, they seem to think that their city is the most beautiful in the world now, mainly due to old world charm. The addition of this new Gazprom City, would take away from the true beauty of St. Petersburg.

“Gazprom City: the future, rather evocatively named St. Petersburg headquarters for Russian energy giant currently the subject of a high-profile design competition. This new “city,” however, will just be a cluster of high-tech administrative buildings, although the main tower “is to rise at least 300 meters (985 feet) into the sky and symbolize the growing power of the firm. It is also to be situated just opposite the famed 18th century Smolny Cathedral on the Neva River in historic St. Petersburg.” This location has proved rather controversial.”

Link to the rest of the Article!

If these designs are incorporated they will be some of the most beautiful buildings that have ever been built.

The winner of the competition for best plans will be announced December 1st, 2007 and the City will be completed by 2016!