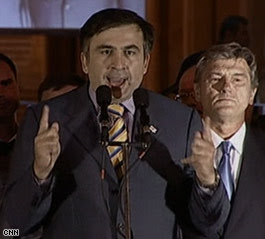 Sitting ducks for a stray bomb……..?

I just read an article about the Presidents of…….

Presidents attend Georgia rally after cease-fire deal:
The presidents of Ukraine, Lithuania, Latvia and Poland showed support for Georgia by appearing on stage with Georgia’s president in front of a large crowd in Tbilisi. Earlier, the Russian and French presidents announced a six-point plan for settling the conflict in Georgia.

I want to say something,: If Russia is such a bad, evil, terrible, tyrannic and despicable Empire. What are the Presidents of five (5) countries that hate Russia, doing standing all together in a so called war zone of death, on a stage proclaiming their hate for Russia!

The way I look at this situation if Russia was all they say, there would be five (5) less presidents at this moment. They either are the least intelligent Presidents that live on earth or they know that Georgia has been feeding the world a line of elephant droppings to exploit the media system.

I think that the World needs to wake up and see the “Hand Writing on the Wall” or better yet as my Grandma would have said, “Wake up and Smell the Coffee!”