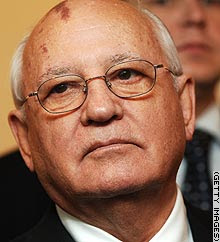 On TV in Russia tonight it was announced:

Mikhail Gorbachev has said that he is planning to create a new political party in Russia. His partner is a Russian banker Alexander Lebedev.

The new organization will be called “the Independent democratic party of Russia”, Its founders want it to take part in 2011 parliamentary elections and challenge the ruling party United Russia.