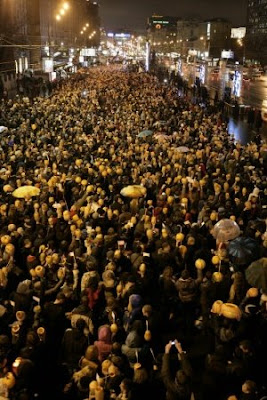 Not just a few people!

While drinking a cup of coffee, I was thinking about the huge demonstration that was held in Moscow on the 2nd of November.

More than 20,000 activists of Nashi Movement held an action of protest in front of the US Embassy in Moscow on November 2, 2008.

Nashi affirm that endless wars that have been rattling the world during the latest decades, the world financial crisis, which bankrupts whole countries, the long-lasting and pompous ceremony of the “democratic election” in the USA are all linked with each other into the never-ending American show. The world has to pay a big price for these festivities: thousands have been murdered, millions and billions of innocent people live in misery, whereas immoral politicians cash in on their grief. Tens of wars have been organized throughout the world, with the latest one of them, the war in South Ossetia, having taken about 2,000 human lives.

After a month of traveling away from Moscow and Russia. I got to see how other countries think and how they feel about America. The feelings are mutual between countries. America is loosing that edge of being the shining spot in the world…..