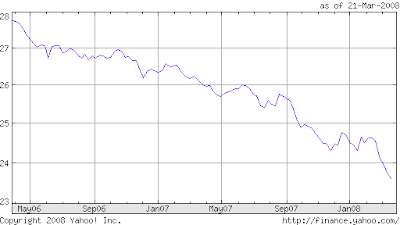 I have watched the Dollar slide downhill slowly but steadily! This effect was not very apparent when I lived in the USA, but living outside of the USA, I see how the Dollar decline is conjunctively with all currencies……
————————————————————–
Dollar down 13.88 kopeks, euro up 16.91 kopeks – Central Bank

Something my Grandmother(who lived through the Depression) said to me several times in my life when I was young.

Grandma said. “Never pass a penny laying on the ground.” She said. “Pick it up & save it for a rainy day.” She also said, “One day the Government will not have any pennies left & you will need those that you find!”

I have found thousands upon thousands of pennies, (now I find kopeks) They really do add up.

Look around you as you walk…….