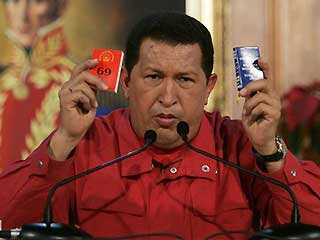 I printed a post not long ago about Russia: “Beware Russia is Growing While You Look The Other Way!” So while everyone is still worried about mole hills, Russia is building Mountains!
————————————————-
BARVIKHA (Moscow Region), July 22 (RIA Novosti) – Russian energy companies have signed cooperation agreements with Venezuela’s state oil and gas company as part of an official visit by the South American country’s president to Russia.

LUKoil and PDVSA signed a memorandum of understanding and an agreement on joint exploration in the Junin-3 area, also in the Orinoco belt.

The documents were signed in the presence of Russian President Dmitry Medvedev and Venezuelan leader, Hugo Chavez.

Chavez told the Russian leader: “We are happy to be here, and this is an excellent opportunity to promote and improve our relations and open up new horizons.”

Medvedev said the Russian-Venezuelan talks would give “another powerful impetus” to bilateral relations.
————————————————-
Looks like Russia Growing! What with major input into Africa, South America, China & many more. Russia is starting to prove that they are serious about their new Democracy. I am starting to understand that Russia looks at the world allot different than America…..

And it is not all Bad!