Russia: Looks Like Tblisi Airport is in Good Shape! 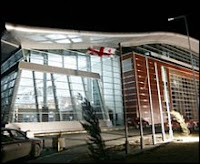 In another development, the Georgian government has backtracked on an earlier accusation that Russian planes bombed two military bases near Tblisi overnight. A new statement from the Ministry of Internal Affairs says that bombs were dropped on uninhabited areas.

Russia insists its airforce has only attacked military targets. (Link)

Bet CNN does not print this either. All Western media is now at the Bad Russia, poor Georgia stage and seem to be stuck in that mode.

Now be watching for Ukraine to be flapping their mouths and waving their arms. Ukraine loves the Western world as much as Georgia……. (Next up poor Ukraine)