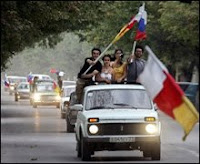 Russia has made it official. Abkhazia and South Ossetia are considered independent.

Russian President Dmitry Medvedev announced Tuesday on Russian TV that he has signed a decree recognizing the independence of the breakaway Georgian territories of South Ossetia and Abkhazia.

After Russia’s parliament urged the move Monday, the U.S. State Department said recognition of the two areas would be “unacceptable” and U.S. President George W. Bush urged the Kremlin against it. (Link)

I guess I will say it one more time: Neither Russia or Medvedev could care less what Bush or the USA has to say…….