On TV today in Moscow:

President Medvedev has said that Russia is ready to break off its relations with NATO if necessary. A statement from Medvedev about NATO. 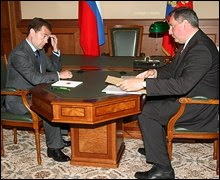 “We’ve been developing our relations with the North Atlantic Alliance for a long time. We would like these relations to be full-fledged and to be real partners, but we don’t want any illusions of partnership. When we’re being surrounded by military bases along our borders, and when more and more countries are being dragged into NATO, we certainly don’t like it,” said Medvedev.

This was stated after a meeting with Russia’s ambassador to NATO, Dmitry Rogozin. Dmitry Rogozin briefed Medvedev on NATO’s attitude towards the current situation in South Ossetia. In his view they’re applying a double standard as they’re blaming Russia, although Georgia began the conflict.

Medvedev will do it….