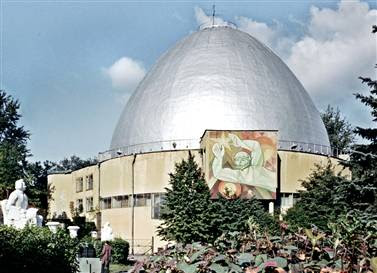 I found this sad situation about a Planetarium in Moscow that seems to be loosing the battle to greedy people……
———————————————————————-
Opened in 1929 the futuristic silver-domed Moscow Planetarium has been closed for repairs since 1994. Plans to reopen the landmark structure, shut shortly after the Soviet collapse, are mired in a years-long conflict for control over its real estate.

The conflict took a startling turn last week when staffers say about 20 uniformed men forced their way onto the grounds, beat an unarmed employee and proclaimed that a new boss was in charge.

The space-age cupola of the planetarium, which opened in 1929, embodied the Utopian dreams of a nation that saw science as the key to a glorious future.

Now it stands as a symbol of an era in which millions of Russians believe the good of society is routinely sacrificed to the commercial interests of bureaucrats and businessmen.

“It’s shameful,” said Anatoly Cherepashchuk, director of the Shternberg Astronomy Institute at Moscow State University. “It’s no good when for 14 years all of Moscow and society suffer because of some disagreement among businessmen.”

The word science comes from the Latin “scientia,” meaning knowledge.

How do we define science? According to Webster’s New Collegiate Dictionary, the definition of science is “knowledge attained through study or practice,” or “knowledge covering general truths of the operation of general laws, esp. as obtained and tested through scientific method [and] concerned with the physical world.”

What does that really mean? Science refers to a system of acquiring knowledge. This system uses observation and experimentation to describe and explain natural phenomena. The term science also refers to the organized body of knowledge people have gained using that system. Less formally, the word science often describes any systematic field of study or the knowledge gained from it.

Seems that Science helps make the world a better place…….