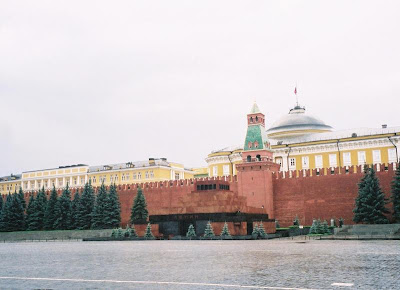 I found this article about possibly moving Lenin’s body from the mausoleum on the Red Square….

Lenin’s body, with its face uncovered, has been on public display in a glass sarcophagus housed in a mausoleum on Red Square since his death in 1924. However, his continuing presence in the heart of Moscow has been a source of considerable controversy since the collapse of the Soviet Union in 1991.

The idea of Lenin’s reburial at a memorial complex currently built to the north of Moscow has been discussed at an official level, the cemetery’s art director and sculptor Sergei Goryaev said.

The final decision on the issue has yet to be taken, Goryaev said, adding that more important Russian and Soviet historical figures could be also reburied at the complex.

The memorial complex, a counterpart of the famed Arlington National Cemetery in the United States, is expected to be unveiled in 2010. It’s more than 53 hectares has space for more than 30,000 graves.

Russian President Vladimir Putin signed the decree on its construction in 2001.

This is a controversial subject in Russia & I would like to see what my wife has to say about this? (So lets ask her!)