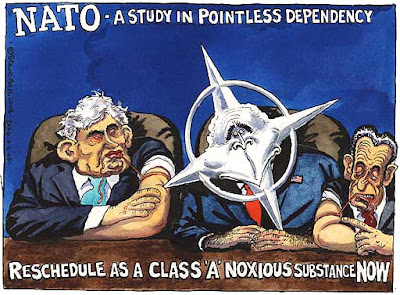 I have had a few comments about the issue of NATO and whether NATO is a viable organization any more. The latest issues are Russia and the split of the Old and New NATO!

Germany and France have been cautious in their diplomatic approach to Moscow.

China and South Africa have supported the Russian Ambassador at the Security Council.

The President of the Czech Republic, Vaslav Claus, has spoken critically of the role of NATO and the EU in the conflict. He said he could not compare recent events to the ones in 1968, when Soviet troops entered the Czech capital Prague to restore communist power there. According to Vaclav Claus, that was a tough political move, unlike now when Georgia’s actions have caused a humanitarian disaster. He also linked events in South Ossetia with the recent declaration on Kosovo’s independence.

London stands and will stand for the development of relations with Moscow. David Miliband, has said isolating Russia would not be a good response to the crisis.

Belarus President Aleksandr Lukashenko has said that Russia’s calm and wise military response to Georgian aggression will ensure peace in the Caucasus for many years to come. Lukashenko made the comment following a meeting with President Dmitry Medvedev in Sochi. (Link)

NATO is seems to have a rift down the Atlantic Ocean! What do you think is NATO a viable organization any more?

I think that Europe would be better with out NATO and more secure! Seems to me that one of the most important issues is getting along with your neighbors.

The USA has given Europe something to think about……