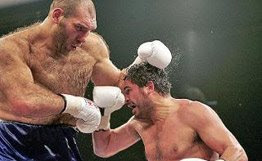 The judges’ decision to declare a Valuev victory at the Max Schmeling arena late on Saturday was unanimous. However, there was some initial confusion when the fight was at first declared, in what turned out to be a mix-up, a split decision.

“It is great to have the title back and I am very happy about it,” said Valuev after the fight.

Since then Chagaev has defended his title once, but a torn achilles tendon forced a delay in his mandatory challenge bout against Valuev. On July 4, the WBA decided to sanction a match against the Russian’s closest contender, John Ruiz.

Chagaev is currently what the WBA calls a “champion in recess,” and Valuev will now have to face Chagaev before June 26, 2009, if the Uzbek manages to get fighting fit by then. (Link)