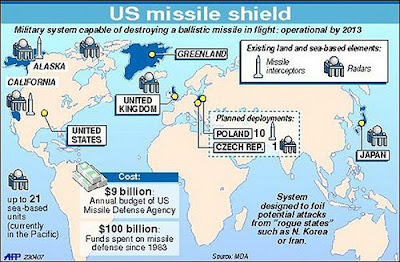 I have had a good laugh today. The Western World has gone bonkers! The Western press and Governments in the USA and Europe have once again made it look like Russia is a bad, lowlife and despicable Empire of Evil.

All President Medvedev had to do was threaten to put Missiles in Kaliningrad as a response to the USA putting Missiles in Europe and you would have thought that Medvedev was a demon from Hades!

But let Russia counter move anything that the West does and let the games begin….

The West is enraged at the statement in Dmitry Medvedev’s address that Moscow is ready to deploy short-range Iskander missiles in Kaliningrad in response to the U.S. deploying AMD elements in Europe. The EU calls the Russian government’s plans “unpleasant surprise” and “blackmailing”. Even Russia’s traditional partners condemned it this time: German Foreign Minister Frank-Walter Steinmeier called Mr Medvedev’s words “the wrong message at the wrong moment”. Moreover, the EU and NATO are preparing for responding to Moscow’s “aggressive” actions.

Yesterday Russian President Dmitry Medvedev became one of the key newsmakers in the West. Abstracts from his first state of the nation address were cited by many European papers. Their attention was mainly drawn by the part concerning Russia’s possible reaction to the U.S. deploying AMD elements in Europe. “Moscow playing muscles”, “Russia threats”, “Russia and Obama: Welcome to cold war” – these are the headlines of yesterday’s newspapers in Germany, Belgium, Austria and Britain.

Warsaw negatively reacted to the prospect of Iskander missiles’ appearing in Kaliningrad. Poland will be its main target because it is there that Washington plans to deploy its ten AMD elements. According to Polish Foreign Office Chief Radoslav Sikorski, “Dmitry Medvedev’s statement is no friendly act.” “What worries us the most is that earlier we heard such rhetoric from generals, and now we hear it from the President when he delivers his keynote speech,” the Minister said. Chairman of the Polish Parliament Bronislav Komorovski was not that diplomatic, “Now that a new administration has come to power in the U.S., such statements only aggravate the situation. They resemble blackmailing, which no one approves of.”Read More of Original article:

Yesterday I said that this was a Chess move. Right now it is just a check in Chess. But it could become a Checkmate!

Why should any one be surprised by Medvedev’s remarks? Many NATO members and the EU itself have doubts why the US needs to deploy an anti-missile in Europe. If Iran and North Korea are a threat – Washington’s so-called “rogue states” – then place the anti-missile system in a place that could counter these so-called threats. The fact is Iran and North Korea are not a threat to Europe. But such a system is a very real threat to Russia.

When Medvedev brought up the issue of countering Washington’s plan for anti-missile defense, media reaction was largely negative. Medvedev was deemed as rude, insensible, aggressive, and speaking out of turn. The commentate consensus tells us to be nice and respectful of America’s president-elect. Sure. Why not? But the commentary is not made up of leaders. The commentary is rarely, if ever, held accountable for what it says and writes. Medvedev doesn’t have this luxury.

I thought Medvedev’s speech was brilliant. It hit all the right buttons. No leader today can afford to take national security lightly, particularly the Russian president. The West has repeatedly lied to and taken advantage of Russia since the end of the Cold War. Medvedev reminded Obama that just because there will be a new occupant in the American White House doesn’t mean Russia will change or sacrifice its security interests. Medvedev did Obama a favor: the new American president should have no illusions about where Russia stands. Read More Of Original Article:

Peter Lavelle’s writings above get to the point. The point is the West does not like reality and Russia keeps having to slap the Western worlds face with reality!

PS: I do not think that with the state of financial affairs in America that my, yours or anyones tax money needs to go into Europe and build missile defense systems.

Update: The United States is “frustrated” at Moscow’s refusal again to cooperate on missile defense in Europe, U.S. State Department spokesman Robert Wood has stated. “It seems that every time we put forward a proposal, they reject it,” Wood said on Monday. However, Russian Foreign Minister Sergey Lavrov stated on Saturday that Russia would negotiate with the new U.S. administration on the missile program.