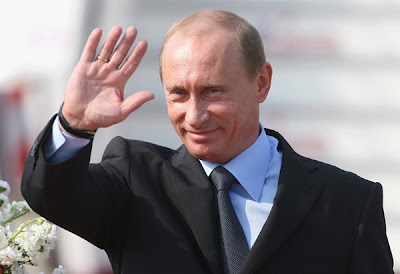 I was reading this article while drinking my coffee this morning, about the Russian People want Putin to stay as President. I do not know how true it is but I know that I myself want to see him stay in power! I think that the country and people need him to stay where he is at.

That is just my 2cents worth!

Regions ask the president to stay:

Russia undergoes a wave of public rallies in support of extending Vladimir Putin’s powers for the third presidential term. The opposition believes the rallies were organized by the United Russia party. However, both the Kremlin and the United Russia said the initiative is coming from the people.

Residents of Chechnya and Tver rallied in support of the third term for Vladimir Putin on Wednesday. Earlier, there had been rallies in Volgograd and Kamchatka. Other regions are about to hold the rallies soon.

In Tver, the event was organized by “the ‘For Putin’ initiative group of citizens” who worded its purpose as follows: “We should by all legal means strive for the continuation of Vladimir Putin’s policy, the policy of national success and national pride”. Specially for the event, Tver city authorities lighted the torch on the Victory obelisk, which is normally done on very special occasions only. The rally gathered over 10,000 people. Nadezhda Afonina, head of Tver education department, said she was happy with how easily she managed to fill the quota of 3,000 people (teachers and students) imposed on her just one day before the rally. Attorney Pavel Astakhov, who arrived to take part in the event, could not refrain from agitation. He suggested that Tver residents should choose Putin at the December 2 election just like young women choose husbands: “Clever, energetic, reliable, with whom we all are safe and protected”. “We lawyers will definitely find a way to make all our hopes come true,” the attorney added.

In Chechnya, the rallies in support of President Putin took place in Grozny, Gudermes, and Achkhoi-Martan. The rally in Grozny consisted mostly of university students. “We have been warned that we should secure the attendance of all students,” said an employee of the University of Grozny. Files of young people dressed in T-shirts depicting Chechen President Ramzan Kadyrov and Vladimir Putin, and carrying banners with “Let’s give third term to Putin!” slogans, filled in Dinamo stadium guarded by police officers in parade uniforms.

The 20,000 people that gathered for the rally asked Putin to stay for the third presidential term. Kommersant’s reporter asked how they account for their slogans since the president had already said he would not change the Constitution and would not stay for the third term. One of the activists answered: “Constitution is the nation. What the nation decides is the law.” Similar rallies took place in Gudermes and Achkhoi-Martan. The participants urged their fellow young activists from other regions of the South Federal District to support the initiative of Chechnya’s president and parliament to prolong the powers of the current Russian president.

Volgograd mayor Roman Grebennikov gathered the city residents under the slogans “Putin, we stand with you” and “Working class for Putin”. He suggested signing an address that calls for considering the State Duma election as a “referendum of trust to Vladimir Putin”.

Several more regions are ready to join the action. Rzhev is to host the forum of Putin’s supporters on November 2; Vladikavkaz has scheduled the forum of North Ossetia’s public movements in the president’s support for November 3, and Yakutsk hosted on Wednesday the first session of the Pro President movement.

Activists of the latter already gathered over 5,000 people in Petropavlovsk-Kamchatsky a few days ago, so as to ask the president to stay for another term. The Fair Russia party believes that rally was so largely-attended due to the United Russia’s administrative resource. “The mayor gave orders to schools and kindergartens to gather for the rally. All employees there were disgusted. Naturally, the United Russia is behind all that,” said Sergei Pavlov, leader of the Fair Russia’s branch in Kamchatka. “Heads of city administration departments personally telephoned the directors of schools and kindergartens,” said Mikhail Smagin, second secretary of the Communist party’s regional committee. Smagin said the rally was organized by Vladislav Skvortsov, mayor of Petropavlovsk-Kamchatsky and member of the United Russia’s regional political council. Meanwhile, one of SPS leaders Boris Nemtsov, referring to the experience of his campaign visits to dozens of cities, called people’s initiatives “pure grovelling”. “The most ecologically clean site in Russia is Putin’s body: it’s polished by licking,” said Nemtsov.

However, local rally organizers deny the United Russia is mixed in the action. “I am the United Russia’s supporter, but I’m not its member. They didn’t help us,” said Igor Zolotar, one of the co-founders of the Pro President movement in Kamchatka. Volgograd’s mayor (who is a candidate for the United Russia’s membership) said that the rally has no relation to the election, because there were no hints at any party during the event.

Valery Ryazansky, member of the United Russia supreme council’s bureau, denied that the party is mixed in the wave of rallies as well. “It is people’s initiative. We openly declare that the upcoming election is a referendum in support of Putin. Yet, we should keep in mind that people in the regions can have their own initiative. People feel the situation and understand that Putin means social stability,” he said. Ryazansky also reminded that the calls on Putin to stay for the third term have already occurred before, and “were articulated by regional parliaments as well”.

In spring 2007,Federation Council Speaker Sergei Mironov promoted the idea of prolonging presidential powers. Mironov suggested that regional lawmakers should discuss whether it is possible to introduce amendments to the Constitution. The United Russia said it is ready to discuss the issue as well after Putin personally agreed with Mironov that the presidential term can be reconsidered. By the way, the draft constitutional amendments have already reached the State Duma thrice: from Magadan’s lawmakers in 2002, from Ivanovo’s – in 2003, and from Chechnya’s – in 2006.

Regional lawmakers are ready to join the current wave as well. Deputies of Chelyabinsk’ and Tyumen’s regional parliaments plan to adopt the address to the president asking him to stay for the third term, initiated by local United Russia members. On October 16, Putin received the same request from the people of art: in The Russian Newspaper, on behalf of 65,000 art professionals, Russian Academy of Arts president Zurab Tsereteli and Russian Foundation of Culture president Nikita Mikhalkov asked the president to stay after 2008.
The Kremlin refrained from commenting on the nation-wide movement in the president’s support. A high-ranking source in the presidential administration said the Kremlin has no relation to the numerous regional rallies. Vladimir Putin’s personal reaction to the events is unknown as well.(Kommersant)

Some days I get in a political mood. These articles are for Americans to see what is going on over here. You see, while America is deciding who the next President is, so is Russia!