Russia: The Pirate Escapade is getting Interesting! 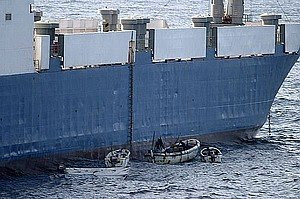 Seems to be an interesting issue that American warships have taken a huge interest in this pirate escapade…..

Several American warships from the 5th Fleet joined the USS Howard, which is blocking the Faina, a Belize-registered cargo ship with a $35-million load of weapons, which was seized by Somali pirates last week. Several European warships are also remaining in the area and the Russian Neustrashimy is heading to the scene from the Baltic Fleet. The American ships have so far restricted their actions to calling on the pirates not to touch the cargo, but their admonitions have gone unheeded. (Link)

But you have to remember that America is behind this whole escapade, so they are there trying to cover up another mess up. Russia is steaming in to put pressure on the American ships and try to expose the game. Pretty neat, Huh….

PS: Update, It seems that everyone is confused – It was said by Ukraine that the tanks are going to Kenya then the USA says, “NO they are going to Sudan.” Then Kenya said that they were for them and at the same time Sudan said that they are theirs. Then the pirates were fighting among each other, but that changed also to the Pirates are celebrating the Muslim feast of Eid al-Fitr despite being surrounded by American warships and helicopters. The Pirates say that they are having a good time and wish the world all peace and happiness…….