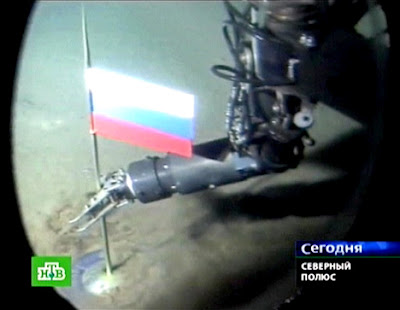 I was drinking my morning cup of coffee and decided to see what was up with Russia and the North Pole.

Well it seems that Russia has without a doubt planted a flag under Santa’s house. Now Russia lays claim to all the mineral rights that Santa has been keeping for himself. (Now you know how Santa makes all those presents).

I think that this is neat, But now we see what the other countries do. Who will be next to plant a flag and claim their chunk of the North Pole? (link)

I guess, USA or Canada!

Even though Canada is talking trash about the expedition from Russia. Canada is saying that the “Russians are 15th Century” acting.

At least the Russians are doing something different to irate the World!!!

There has not been a good competition to the unknown in a long time. Canada is just jealous that they did not do it first.