Today Putin has left no doubt about his thoughts on the USA. Medvedev seems to be very quiet in this issue and that worries me…..
——————————————————————
Russian Prime Minister Vladimir Putin said the U.S., which has backed Georgia’s NATO membership aspirations, is hampering the peacekeeping operation in South Ossetia by flying the Georgian troops from Iraq to Georgia.

“It’s a pity that some of our partners instead of helping are trying to get in the way, I mean the United States using its military transport aircraft to relocate Georgia’s military contingent from Iraq virtually into the conflict zone, among other things,” Putin said during a government meeting.

Putin said pulling Georgian troops out of Iraq would not change the situation, but called the move a “step back from a settlement.”

He said he was astonished by the double standards and cynicism of U.S. foreign policy and accused U.S. diplomats of retaining a Cold-War mentality, labeling the aggressor the victim while the real victim ends up being blamed as the aggressor.

“Of course, it was right that Saddam Hussein was hanged for butchering several Shia villages, while the current Georgian rulers, who wiped out ten Ossetian villages in no time and burnt people alive in their homes, must be protected,” Putin said sarcastically.

A top Russian diplomat accused foreign media on Sunday of showing pro-Georgian bias in their coverage of the ongoing conflict. (Link) 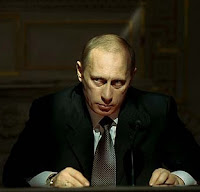 Georgia is in trouble with a capital T!