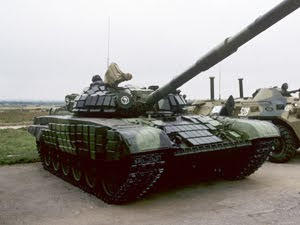 Where else can you go and find 200 tanks unguarded and hatches unlocked? But Russia…

It seems that last November, at a tiny railway station near Yekaterinburg in Russia’s Urals. About 200 tanks were unloaded from the rail cars and left near the station. The people living there say that the tanks seem to be in good order and anyone can get inside to feel like a real tank operator. They say that the only thing missing is ammunition for the tanks weapons…

Now I myself, really wish that I could go see these tanks. It seems they are the T-72 model of tank. There are some other types of armored weapons but the brunt of the 200 vehicles are tanks.

The spokesperson for Ural’s Military Command of the Russian Army, Dmitry Burdakov, said that the vehicles have not been forgotten and were stationed where they are on purpose while being relocated. He promised to complete the relocation by mid-March, saying that every tank will go under its own power to a central location. (Link)

Could you imagine 200 tanks being left out in the open in America – unguarded and open? (Much less being within driving range of a huge city.)

No – I really can not imagine that happening. Everyone would hot wire them and take a ride, I know I would want to… 🙂

That is why I love Russia!