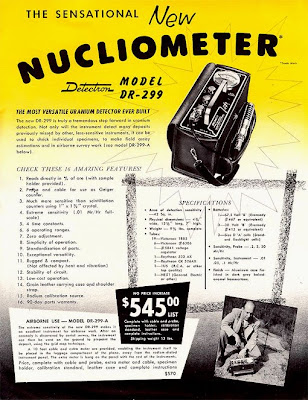 Nucliometer to help find Uranium! (From the 50’s)

One of our good readers Blackseabrew brought up in a comment the fact that the world was starting to run short on uranium, for nuclear power plants. He said that the supply was limited.

I started to look around at what Russia had available. Here is what I found:

Russia’s total uranium reserves are significantly more than 1 million tons, the head of the Rosatom nuclear corporation said on Tuesday.

The article explained that Russia has enough uranium to supply the world for 60 years. (That is not very long to me!) They also went on to say that there are several new fields of Uranium that are being developed in the future. Including a field in South Yakutia. <-- This link will give you more information about Russia's uranium future than you really would want to know. 🙂 Now at they same time that I was checking on all this radioactive stuff and along comes a news report about the USA and Russia's uranium:

Looks like we know where a chunk of that million tons of radioactive material will go. Price is $50 per pound at this writing. That is going to be a bunch!

Blackseabrew could be right? So get the price locked in now because what I am reading while researching this article, is that uranium could go off the price scale in the future…

PS: I need me a Nucliometer! 🙂