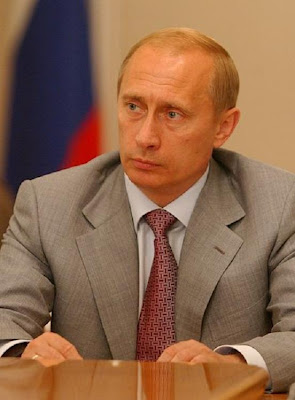 Today: Prime Minister Vladimir Putin has accused the US of provoking the conflict in Georgia, possibly for domestic election purposes.

In a Interview with CNN, Mr Putin said: “The fact is that US citizens were indeed in the area in conflict during the hostilities. He also said: “It should be admitted that they would do so only following direct orders from their leaders.”

Mr Putin added: “The American side in effect armed and trained the Georgian army.” Then he went on and said: “Why… seek a difficult compromise solution in the peacekeeping process? It is easier to arm one of the sides and provoke it into killing another side. And the job is done.”

“The suspicion arises that someone in the United States especially created this conflict with the aim of making the situation more tense and creating a competitive advantage for one of the candidates fighting for the post of US president.”
——————————————————————————————————–
Now to us in Russia this is not new information. This is very old information, in fact, I have been pointing to several issues of American and NATO interference from the beginning. Russia has been screaming about USA military involvement the second day they pushed Georgia back from South Ossetia. Russia has found much evidence to support American meddling in the Caucus region.

Strange how all of a sudden the Western world has gone off the deep end, calling Putin names again and reiterated the threats double time!

I guess: Putin is a powerful individual. The West is scared of him….