Russia: Temples and Tulips of Kalmykia! 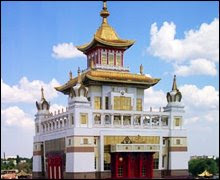 On one of our trips, (the one that I lost all the pictures) we had the opportunity to go to Russia’s republic of Kalmykia which is the only region in Europe where Buddhism is the dominant religion. Temples were destroyed there during the Soviet era and Buddhism went into decline. But in a new age of tolerance, the steppe region is enjoying a religious renaissance. There are now 67 Buddhist temples in Kalmykia!

The Republic of Kalmykia (Russian: Респу́блика Калмы́кия; Kalmyk: Хальмг Таңһч) is a federal subject of the Russian Federation (a republic). The direct romanization of the republic’s Russian name is Respublika Kalmykiya, and that of the Kalmyk name is Xal’mg Tanghch. It is remarkable for being the only state in Europe where the dominant religion is Buddhism. It has also become famous because its current government has made it the chess center of the world. (Link)

One of the things that we remember about the area was the wild tulips. We had hundreds of pictures of fields of red and yellow tulips blowing in the wind. We drove for miles and miles and never got tired of seeing millions of wild tulips. We stopped and walked in the fields and it was truly fantastic. Sveta and I had a magical trip in those tulip fields. It is what fairy tales are made of… 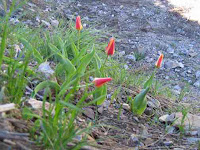 Kalmykia was a wonderful part of the world and the people were so nice. We are looking forward to going back one day.