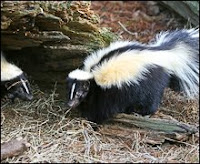 Ekaterinburg a town on the eastern slopes of the Urals mountains on the banks of the beautiful Iset river has a Zoo and it seems that employees of the city zoo have named a pair of skunks after the famous TV – FBI agents, the stars of the X-Files

Mulder and Scully are two striped skunks that were brought to the Ekaterinburg zoo from Moscow. They are currently in quarantine to ensure good health and will be on public view in mid-September. The normally pungent scented pair will now leave the air fresh since their scent glands, which release a distinctly revolting odor when skunks feel threatened, have been removed.

“The skunks are called Mulder and Scully. It was the employees who gave them their names, despite the fact that there’s nothing mysterious about them.” said a zoo representative in an interview.

This is the first time that the Ekaterinburg zoo has acquired skunks. (Link)

What good names for skunks! Gotta love it.