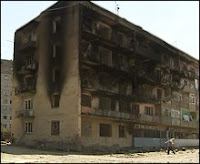 The facts are slowly coming out:

Europe. Traveling through the war ravaged capital Tskhinval, some officials said crimes against humanity had clearly been committed there.

“It’s terrible what I can see here,” Czech MP Lubomir Zaoralek said. “I don’t understand this attack against common people. It’s clear that it is a crime against humanity.”

Elected representatives from overseas saw with their own eyes houses and administrative buildings smashed by bombs. They visited basements where hundreds took shelter during the bombardment. Residents of the devastated city told them what they endured at the time of the attacks.

A visit to a ruined school left a painful impression on Ukrainian deputy Anatoly Tolstoukhov: “If a widely used Soviet expression “all the best goes to our children” is true, then shells and bullets are the best the Georgian authorities could give to these children,” he said.

But the harshest impression came when the delegation came to the Jewish quarter in Tskhinval. It was virtually destroyed in the bombing and scars of war are everywhere.

“We have to speak out about it and we have to investigate what happened there”, Czech MP Lubomir Zaoralek said. (Link)