Russia: Ukraine is Going to Lose Crimea if They Continue to "Play Games"! 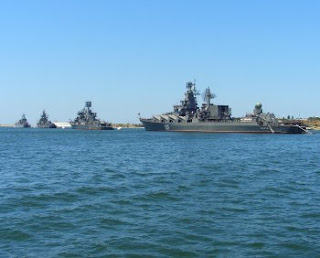 Russia’s military said Thursday that it would ignore a decree by Ukrainian President Viktor Yushchenko requiring its Black Sea Fleet to give 72 hours’ notice before undertaking any movements from its Crimean port.

Anatoly Nogovitsyn, deputy head of the armed forces’ General Staff, said the order, which also would require the Russian Navy to submit a request 10 days before ships return to the Crimean port, was illegitimate and violated previous agreements.

The Black Sea Fleet has been deployed to the Georgian coast as part of Moscow’s military action against Georgia.

“We don’t consider such orders as legitimate,” Nogovitsyn told a briefing. “We will follow the existing agreements.”

The chief of Ukraine’s General Staff, Serhiy Kirichenko, promised to fulfill Yushchenko’s decree. “The president’s decree on the Black Sea Fleet will, of course, be implemented on the territory of Ukraine,” Kirichenko told reporters, the Unian news agency reported. “The Defense Ministry and the General Staff are among those state bodies responsible for this task.”

Yushchenko’s order, issued Wednesday, is seen as a strong show of support for Georgia as both countries seek to break free of Moscow’s influence. (Link)

So you understand: The Russian base that Ukraine is playing games with is located in the Crimea….

Russia has a contract for this Navel Port until 2017 and Russia pays its Rent.

So, if someone changes the lock with out permission, you kick the door down…..