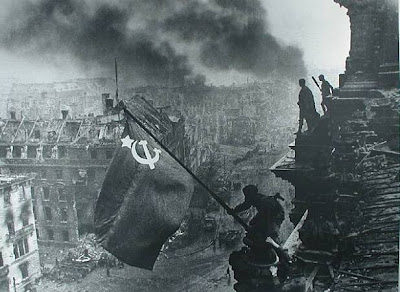 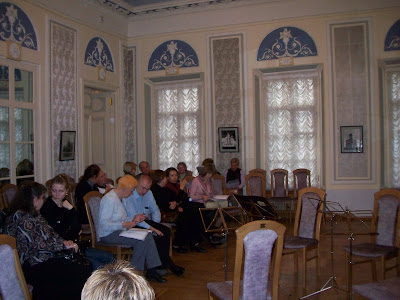 My Wife & I traveled once again to the center of Moscow. The center was quiet due to the inauguration for Medvedev. The Police force was out in full glory! I think that is a smart move on Moscow’s part, in this day & age of people who have no morals when it comes to blowing up public places & things. Over the years Moscow has had its share of Metro, buses and other public buildings bombed by scrupulous people. (So better safe than sorry!)

Once again the Tourists were everywhere. I know that many would be disappointed because Red Square was closed for inauguration.

My wife & I went to a wonderful classical music concert in the Mirror Hall of the Institute of Art Criticism . It was made up of 3 violins, 1 cello and piano. The music was fantastic & suit our tastes perfect. We found this place the last time that we traveled to Moscow Center. The price was free and the music was priceless.
———————————————————- 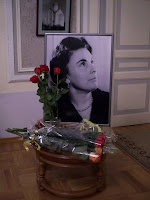 Festival “Paying Homage to the Master”. To the 90th birthday of Tatyana Gaidamovitch

The events of the festival “Paying Homage to the Master”, dedicated to the 90th birthday of Tatyana Gaidamovitch (1918-2005) begin on May, 3, and last till May, 15, 2008. They will take place in the Moscow Conservatory halls, in the Stanislavsky music theatre and in the Mirror Hall of the Institute of Art Criticism.
http://www.mosconsv.ru/english/news.phtml?id=112
Link to Moscow Conservatory!
———————————————————-
Svet & I are talking about going this Saturday the 10th, to see another concert by the same men. They were that good!

Tomorrow is the 9th of May. (Victory Day) That means the biggest Holiday of all is going to happen in Russia. Russians have not forgotten about those who fought in WWII. This holiday commemorates that time in history.

This year Russia is going to revitalize the tradition of displaying military might at the Red Square. I wish that I could be there for this parade. Once again the center of Moscow will be quiet and peaceful. (except when the military jets fly over head.) Maybe my wife & I will sneak downtown to try to catch a glimpse of a Tank!

That would be cool! 🙂