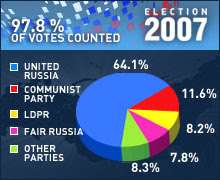 Official election results to be announced on December 7 or 8

RBC, 03.12.2007, Moscow 08:02:37.Yabloko political party leader Grigory Yavlinsky does not rule out the possibility that he may file lawsuits regarding irregularities during the election campaign, he told journalists during a press conference at the party’s headquarters, noting that in his opinion violations of every single article of the election law could be observed during the campaign, including the procedures of drawing up candidate lists, the issuance of absentee ballots, and the opening and closing hours of polling station, among others.

RBC, 03.12.2007, Moscow 09:18:08.With 96.2 percent of the ballots counted, United Russia is leading with 63.2 percent of the vote, and the Communist Party is second with 11.7 percent, Vladimir Churov, Deputy Chairman of the Central Election Commission, told reporters.

The other three parties – the Democratic Party of Russia, the Social Justice Party and Patriots of Russia – have less than 1 percent of the vote.

RBC, 02.12.2007, Moscow 21:18:21.Exit polls held by the Russian Public Opinion Research Center (VCIOM) show that four parties, Unified Russia, Communist Party, Liberal Democratic Party and Fair Russia, have overcome the 7-percent threshold winning 61, 11.5, 8.8 and 8.4 percent of the vote respectively. According to VCIOM, turnout was around 59 percent in the parliamentary elections.

The rest of the parties have failed to break the 7-percent barrier, mustering a total of 10.3 percent of votes. According to preliminary estimates, the United Russia party could be awarded 306 seats, the Communist Party 57 seats, the Liberal Democratic Party 45 seats and the Fair Russia 42 seats in the State Duma.

Exit polls were held at 1,200 polling stations across 57 regions and republics of Russia, and the margin of error does not exceed 2 percent.

RBC, 02.12.2007, Moscow 19:46:52.Moscow has witnessed a 50.04 percent voter turnout in the parliamentary elections as of 7 p.m., according to the Moscow city election commission. No significant problems had been revealed by that time.

RBC, 02.12.2007, Moscow 19:39:16.Total number of political party observers is close to 1 million people, Igor Borisov, a member of the Central Election Commission, told reporters. “Observers from political parties are present in almost all polling stations, watching the voting process. Some parties cover 100 percent of polling stations, some less,” he noted.

He said the Communist Party had reduced the number of its observers compared to the previous parliamentary election of 2003, to 50-100 percent of polls, depending on the region.

RBC, 02.12.2007, Kemerovo 17:47:08.Voting for the State Duma ended in the Kemerovo region, with the voter turnout at 73 percent an hour before polling stations closed. According to the regional election commission, the region’s residents voted today in 17 local elections of various levels alongside the general elections.

Voting goes to plan in the Far East

RBC, 02.12.2007, Moscow 17:35:18.Voting in the Far Eastern Federal District has been quiet, with no significant irregularities reported, Alexander Chekalin, Senior Deputy Interior Minister of Russia, told reporters at the information center of the Central Election Commission, citing data of as 4 p.m. Moscow time. He said voting was also going to plan in other federal districts.

Voting over in Krasnoyarsk region

RBC, 02.12.2007, Krasnoyarsk 17:17:14.Parliamentary voting has completed in the Krasnoyarsk region. Turnover stood at 55.85 percent as of 7 p.m. local time (15:00 Moscow time). Konstantin Bocharov, chairman of the regional election commission, said the data did not include figures from several polling stations in the Boguchansk district, due to lack of communication.

RBC, 02.12.2007, Moscow 15:54:32.By 2 p.m., 28.19 percent of voting-age Muscovites had cast their votes, a source in the Moscow election commission said. This is the lowest figure for the Central Federal District, with the Yaroslavl region rising to the first position with 48.11 percent of voters who had taken part in the elections by 2 p.m.

RBC, 02.12.2007, Grozny 14:58:50.As of 2 p.m., nearly 60 percent of voting-eligible people cast their votes in Chechnya, the republic’s election committee reported, adding that no complaints had been received from the republics 431 polling stations.