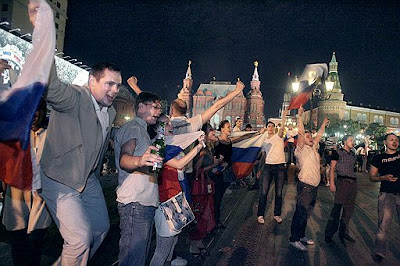 The other night was sleepless……
——————————————————————-
http://www.kommersant.com/page.asp?id=905201
More than 700,000 people celebrated the victory of the Russian national soccer team over The Netherlands with a score of 3:1 in the quarterfinal of the Championship of Europe Saturday night. Such massive exultation has never before been seen in the Russian capital, where, as in other Russian cities, automobile traffic came to a standstill as people came out onto the street shouting “Forward Russia!” and drivers honked in time and emerged from their cars to wave flags. A minor accident took place on Leningrad Prospekt, but the drivers were embracing by the time the police arrived and the matter ended in a conversation about the match. Stranger hugged and clinked bottles of beer or champagne in common toasts.
——————————————————————-
Where we live they tore up the bus stop, broke out multiple business windows, tore down fences & broke beer bottles all over the streets. Boza (dog) & I went for a 3 am walk and got to experience the destructive force of around 60 guys who had way to much to drink.