Unrevealed Secrets of Vladimir Putin’s Recent Visit to London: by Dam-Press. (Translated from the Arabic)

During his recent visit to London and meeting with British Prime Minister Cameron, President Putin passed on a message to the US and France in response to their recent announcement that they will arm the [Al Nusrah] fighters in Syria.

As Russia is a sovereign nation dealing with the sovereign, legitimate government of Syria, some new arms which have never left Russia before [never previously deployed in Syria] will be delivered to the Syrian military.

The Patriot Missiles will be hit and repealed with S 300 SAM [already installed in Syria]. Putin also threatened to deliver the more advanced S400 anti-aircraft missiles far superior to the Patriot missiles and ranked as the World’s most advanced air defense system. 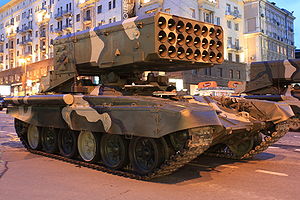 He added that Russia will also supply Syria with state-of –the-art 24-Barrell rocket launchers which have a range of 60 km ranked as the most developed artillery weapon of its kind.

He added that Russia will supply 400 of these launchers which will be able to destroy all targets around Syria’s borders.

A British intelligence report stated that Putin went to London bringing his own Russian cooked food and did not consume anything from Britain including water as he even brought his own water with him reportedly because he had concerns of being poisoned.

The British intelligence site stated that Putin threatened to send other secret Russian made weapons to Syria which would tip the balance of power even further in favor of Syria and re-iterated that these weapons will not be used against Israel on condition that Israel will not participate in the war within Syria and neighboring countries. {Lebanon, Jordan]

Reportedly, the British PM’s response was very weak in relation to Putin’s threats.

Putin’s response came just over 24 hours after Obama’s statement on Saturday that he was going to arm the Syrian resistance.

Putin clearly stated that the Middle East is going to witness a significant change. Syria will be armed with weapons that have never been seen before [in the Middle East] including computer guided smart missiles that never miss their target.

He also added that Russia will supply Syria with Skean 5 ground -to-sea missiles that are capable of hitting and sinking any target up to 250 km off the Syrian coast.

I found this article interesting…

The copy scores 46.2 in the Flesch Reading Ease test, which is considered difficult to read…