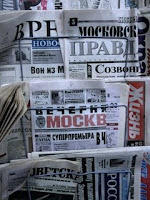 Russia continues investigation into South Ossetia ‘genocide’:
The criminal investigation into the alleged genocide and mass murder of civilians during the August 2008 Russian-Georgian war has been extended until February 2010, an official spokesperson said on Friday.

EU must hold talks with ex-Georgian republics – Russian envoy:
The European Union can not turn its back on direct dialogue with the former Georgian republics of South Ossetia and Abkhazia, Russia’s envoy to the EU said.

Putin vows to develop Russian ties ‘with both parts of Cyrpus’:
Russia will try to strengthen economic ties with both the Greek and the Turkish areas of Cyprus, which should help resolve the division of the island, Russia’s prime minister said on Thursday.

After his visit to Ukraine, Patriarch Cyril is ready to take dual citizenship:
Patriarch Cyril completed a ten day tour of Ukraine which journalists called “unprecedented.” Upon his arrival at a Moscow airport, the patriarch told journalists what overwhelmed him about the country.

Adopted American boy gives playground to Siberian hospital:
A teenager adopted as a child and taken to the US has returned to Russia bearing gifts for his former neighborhood. After raising $60,000 online, Alex Griffith is building a park in his former hometown in Siberia.

S.Ossetia remembers Georgian sneak attack:
A minute of silence will be held in South Ossetia on the eve of the anniversary of last year’s war. On August 8 last year, as the world’s eyes were turned to the Beijing Olympics, Georgia launched its sneak attack.

“The main problem of the South Caucasus is Georgia’s revanchist policy”:
This week’s briefing by Foreign Ministry spokesman Andrey Nesterenko was devoted to the Ossetian war and the consequences it brought upon the region and international community.