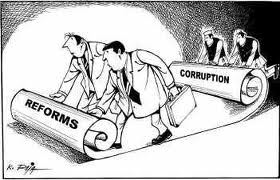 The lower house of the Russian parliament on Tuesday approved a bill increasing fines for bribes by up to 100 times the amount of the bribe given or accepted.

The offer or promise of mediation in bribe-taking, including the physical handing over of the bribe, carries a fine of 25,000 to 500 million rubles ($880 to $18 million) combined with a work ban of up to three years.

The bill provides for custodial sentence as an alternative to a fine, which has led critics to argue the new law is open to interpretation and could lead to abuses.

They have also suggested that the size of bribes might grow as a result.

The Berlin-based non-governmental anti-corruption organization Transparency International has persistently rated Russia as one of the most corrupt nations in the world. In the 2009 Corruption Perception Index, Russia was ranked 146 out of 180 countries, with a ranking below countries like Togo, Pakistan and Libya.