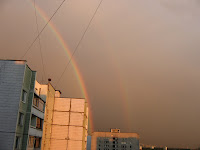 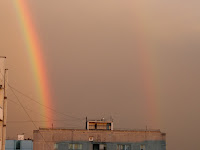 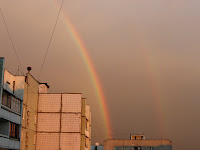 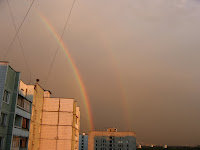 The technical definition for a rainbow is:
“Rainbows are optical and meteorological phenomena that cause a spectrum of light to appear in the sky when the Sun shines onto droplets of moisture in the Earth’s atmosphere. They take the form of a multicoloured arc, with red on the outer part of the arch and violet on the inner section of the arch. More rarely, a double rainbow is seen, which includes a second, fainter arc with colors in the opposite order, that is, with violet on the outside and red on the inside.” (Wikipedia)

What ever the definitions is, they are beautiful. The rainbows that I just took pictures of, came after a long dreary day of clouds and rain. I think that rainbows would be considered beautiful anyway, but when they appear after such a dreary day, they are even more beautiful. This is even the rare double rainbow.(I feel special)

My definition is that God still remembers his promise about never flooding the world again. God said he would keep the rainbow as a reminder! Everywhere in the world rainbows shine. Well today in Moscow Russia, God gave us a double reminder. :))))))