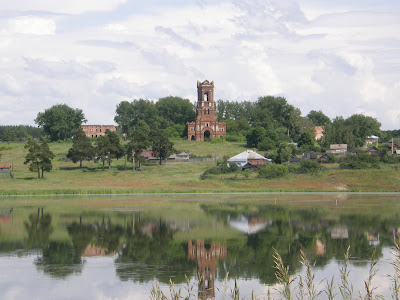 I was drinking my morning cup of coffee & thinking about this last weekend. We went to our Dacha in the Village called “Sunrise to Freedom!”

It seems that the murder stopped the process of rebuilding the church. Seems that there was a lot of underhanded things going on that should not have been going on. So the Orthodox Church wisely shut down, the escapades of one “preacher boy” as I called him.
http://kylekeeton.com/2007/06/life-in-village-is-it-too-crowded.html

The village is back to normal and quiet as always. There was a new public phone that had been put in, the cow was still there, goat ladies still there and of course we (the American & his Russian wife). It was a fantastic weekend full of fun & Bugs!