Today we continue to read stories for kids what were written by Nikolay Nosov. These stories were published first in the magazine for children “Murzilka”. Then many of them make up the foundation of the Nosov’s first collection Rat-tat-tat (Тук-тук-тук), 1945. 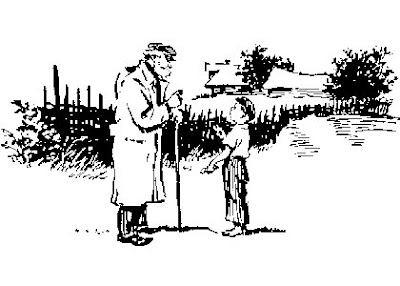 Once Pavlik took Kotka fishing with him (Pavlik and Kotka – names of the boys). But they had no luck that day: the fish simply wouldn’t bite, so they went home. On the way, they climbed over the fence into the collective-farm vegetable garden and filled their pockets with cucumbers. The watchman saw them and blew his whistle, but they ran away. Pavlik was afraid he would get into trouble for picking vegetables from the collective-farm plot, so he gave all his cucumbers to Kotka.Kotka came running home all excited. “Mummy, see what a lot of cucumbers I’ve brought you.”
His pockets were full of cucumbers, he had cucumbers inside his shirt and a large cucumber in each hand.”Where did you get them from?” asked his mother sternly.
“The vegetable plot.”
“What vegetable plot?”
“The collective-farm plot down by the river.”

“Who allowed you to take them?”
“Nobody. I picked them-myself.”
“You stole them, you mean?”
“I didn’t steal them, I just took them. Pavlik took some, so I took some too.”

Kotka started pulling the cucumbers out of his pockets.
“Wait a minute,” said his mother. “Don’t empty your pockets yet.”
“But why?”
“Because you are going to take them back at once.”

“Oh, but I can’t take them back. They grew on the vegetable bed and I picked them. They won’t grow any more just the same.”
“Never mind, you’ll take them and put them back where you got them from.”
“I’ll throw them away.”
“No, you won’t. You didn’t plant them and take care of them, so you have no right to throw them away.”

Kotka began to cry. “There’s an old man there, a watchman. He whistled at us and we ran away.”
“Now, you see how naughty you are. Suppose he caught you?”
“He couldn’t catch us. He’s an old man.”

“You ought to be ashamed of yourself,” said his mother. “That old man is responsible for the cucumbers. When they find out at the farm that all those cucumbers have gone, they will blame the old man. Is that nice?”

Mother stuck the cucumbers back into Kotka’s, pockets and Kotka wept loudly and protested:
“I shan’t go. The old man has a gun. He’ll shoot me.”!
“It would serve you right if he did. I don’t want a son who steals.”

Kotka only cried the louder. “Mummy, come with me, please. It’s dark outside. I’m afraid.”
“You weren’t afraid to take the cucumbers, were you?”

Mother gave Kotka the two cucumbers which didn’t fit into his pockets and led him outside.
“If you don’t put the cucumbers back you needn’t come home.”
She went inside the house and closed the door. Kotka started off slowly down the street.

It was quite dark.

“I’ll throw them into the ditch and say I took them back,” Kotka said to himself, glancing around him. “No, I’d better not. Someone might see me, and besides, the old man will get into trouble all through me.” He went down the street, sobbing. He was very scared.
“It’s all right for Pavlik,” he thought. “He gave me his cucumbers and now he’s sitting at home safe and sound. He isn’t scared.”

He came to the end of the village and took the path over the field. There was not a soul in sight. He was so frightened he almost ran the rest of the way to the vegetable plot. When he got there he stopped outside the watchman’s hut and began to cry. The watchman heard him and came over.

“Why are you crying, little boy?”
“I’ve brought back the cucumbers, Grand-dad.”
“What cucumbers?”
“The ones me and Pavlik picked today. Mummy told me to put them back.”

“Oh, I see,” said the old watchman. “So it was you I whistled to this afternoon. You managed to pick the cucumbers after all. You little scamps!”
“Pavlik took some and I took some too. He gave me his.”

“Never mind what Pavlik does, you ought to know better than to steal from the vegetable plot. See you don’t do it again. Now give me the cucumbers and run home.”

Kotka pulled out the cucumbers and laid them on the ground.
“Is that all?” asked the old man.
“Yes.…No….not quite. All except one,” said Kotka and started crying again.
“Where is it?”
“I ate it, Grand-dad…. I’m sorry, I didn’t mean to.”
“You ate it, did you? Well, you’re welcome to it, I’m sure.”
“But.…but, Grand-dad, won’t you get into trouble because of me?”

“So that’s what you’re worried about, is it?” laughed the old man. “No, I won’t get into trouble for one cucumber. If you hadn’t brought the others back I might have.”
Kotka said good-bye and ran off down the path. Suddenly he stopped and called back: “Grand-dad, Grand-dad!”
“What’s the trouble now?”
“Grand-dad, that cucumber I ate, will they say I stole it?”
“Now, I don’t know as to that,” said the old man. Then he added: “Very well, we’ll say you didn’t steal it.”
“But….”
“Let’s say I made you a present of it.”
“Thank you, Grand-dad. Good night.”
“Good night, son.”
Kotka raced across the field for all he was worth. He jumped over ditches and across the bridge and when he reached the village he slowed down to a walk.