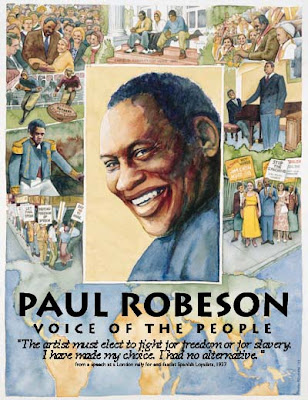 Today I want to tell you about Paul Robeson(April 9, 1898 – January 23, 1976). And we will celebrate his 110 birthday anniversary exactly in a month. When we look for information about Paul Robeson in Internet we can find out that he was an exceptional athlete, actor, singer, cultural scholar, author, and political activist. I want to start my story about him with my favorite video:

Some people knows him just as a great singer, but he was unique man. He had a very strong opinion about fairness and he fought for his beliefs. He toured Republican Spain during the Spanish Civil War and was photographed with members of the Abraham Lincoln Brigade, including its black commander, Oliver Law. His repertoire included Peat Bog Soldiers, which was popular with International Brigades volunteers and veterans alike. Robeson was among the first performers to sing in concert on behalf of the U.S. troops during World War II.

But today I want to tell you just about Paul Robeson and Soviet Union.

After traveling to Europe for several years in the early 1930s, Robeson was extended and accepted an offer to visit the Soviet Union. While there, Robeson was given the red carpet treatment, according to biographer Martin Duberman, including trips to the theater, banquets, and other attractions. Robeson became captivated with this new society and its leadership, declaring “that the country was entirely free of racial prejudice and that Afro-American spiritual music resonated to Russian folk traditions. “Here, for the first time in my life … I walk in full human dignity.”

Through his writings and speeches, Robeson went on to defend the foreign and domestic policies of the Soviet Union and Joseph Stalin. During the Soviet purges, Robeson allegedly told a Daily Worker reporter that “from what I have already seen of the workings of the Soviet Government, I can only say that anybody who lifts his hand against it ought to be shot!” After the formation of the North Atlantic Treaty Organization (NATO), Robeson proclaimed during a speech at the Paris World Peace Congress in 1949 that “It is unthinkable that American Negroes will go to war on behalf of those who have oppressed us for generations… against a country [the Soviet Union] which in one generation has raised our people to the full dignity of mankind.” Sugar Ray Robinson responded to this by saying that although he did not know Robeson he would “punch him in the mouth” if he met him Even while many former left wing supporters of the Soviet Union learned of the atrocities being committed there and began publicly denouncing their former affiliations, Robeson held firm.

In March of 1950, NBC canceled Robeson’s scheduled appearance on former First Lady Eleanor Roosevelt’s television program, Today with Mrs. Roosevelt. A spokesman for NBC declared that Robeson would never appear on NBC. Press releases of the Civil Rights Congress objected that “censorship of Mr. Robeson’s appearance on TV is a crude attempt to silence the outstanding spokesman for the Negro people in their fight for civil and human rights” and that our “basic democratic rights are under attack under the smoke-screen of anti-Communism.” Protesters picketed NBC offices and protests arrived from numerous public figures, organizations and others.

However, because of the controversy surrounding him, all of Paul Robeson’s recordings and films were withdrawn from circulation. From then until the late 1970s, it became increasingly difficult in the United States, if not impossible, to hear Robeson sing on records or on the radio, or to see any of his films, including the highly acclaimed and successful 1936 film version of Show Boat. As far as audiences of the late 1950s (and all of the 1960s) knew, there was only one film version of the show, the MGM Technicolor version of 1951, in which bass-baritone William Warfield played the role that Robeson had played in the 1936 film version.

In 1952, Robeson was awarded the Stalin Peace Prize. In April, 1953 shortly after Joseph Stalin’s death he wrote a eulogy entitled To You Beloved Comrade, in which he praised Stalin’s “deep humanity,” “wise understanding,” and dedication to peaceful co-existence with all the peoples of the world calling him “wise and good”.

I asked my Mom about Paul Robeson and she told me that, yes she knows and remembers him: She told that he was incredible person and that’s mean a lot. Not just Paul Robeson loved Soviet Union, Soviet Union (people and leaders) loved him! Here is a Soviet video of his 60th anniversary movie what was made in 1958 when he was repressed and banned in his own country.

Dear Paul Robeson, Soviet people sends you regard from mountains and ocean!… – that was the end of this movie.

And I just can add: “Dear Paul Robeson people of ex-Soviet Union still remember and love you!”

comments always welcome
——————————
PS. This story started when Kyle publish an old Soviet Anthem on our Video site. This Anthem was sung by Paul Robeson, it was an English, a good translation and a voice of the singer was gorgeous! An Anonymous (DP) asked if the singer is the same Paul Robeson – an American black opera singer and what deal he had with Soviet Anthem back in 1943.