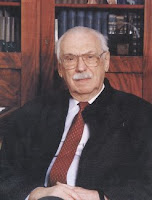 The 13th of March Sergey Mikhalkov celebrated his 95th Anniversary! Thank you Seesaw for reminding us this date.

That’s difficult to say what was Sergey Mikhalkov for us! Generations of Soviet kids grew up on his poems. That was poems of my Mom’s childhood and my childhood and I’ve read it to my son when he was little.

Vladimir Putin sent a birthday congratulations to Sergey Mikhalkov: Putin said, “You are known in Russia and outside it as a talented poet and writer, and you are rightly considered as a Patriarch of National Culture, a personality of a truly unique scale. Literature works of your pen are in the most different genres, but a special place in your creation have the poems, novellas and stories for children, on which more than one generation of the Russians have grown. Your unsurpassed skill and creative longevity, the multifaceted organizational and public activity draw delight and respect.”

Sergei Mikhalkov was born in 1913 into a family of a lawyer. Mikhalkov himself claimed that his family was ancient and noble. In 1928, at the age of 15, Mikhalkov published his first poem and in 1935 he published his most well-known book – Dyadya Styopa – a children’s book in verse about an exceptionally tall policeman.

Mikhalkov joined the Soviet Writers’ Union in 1937. Despite his noble descent and the fact that he joined the Communist Party only in 1950, he managed to survive the Stalinist purges and get into special favor with Communist leaders. In 1938, at the age of 26, Mikhalkov was awarded the Order of Lenin – the top state decoration – for his poems for children.

During the Great Patriotic War Mikhalkov worked as a military reporter. In 1943, together with another military correspondent, El-Registan, Mikhalkov wrote the lyrics of the national anthem of the Soviet Union, which was first played on New Year 1944. Mikhalkov re-wrote the lyrics in 1977 to remove Stalin’s name, and in 2001 wrote completely different lyrics for the same melody to create the current Russian national anthem… 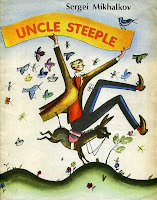 ikhalkov chaired the board of the Soviet Writers’ Union, and is now the honorary head of the body that has replaced it – the International Society of Writers’ Unions. At 95, the writer is still working and taking care of the society’s property and daily affairs.

Aside from his closeness and support from the government, Mikhal­kov’s stories have been staples for five generations of children, and literary critics say that influence is not about to end any time soon.

“I do my best to always tell the truth and not to envy anyone,”

Mikhalkov said in an interview with Ros­siis­kaya Gazeta daily explaining the secret of his long life.

I think that is great advise!

Best wishes and long life for all of you,