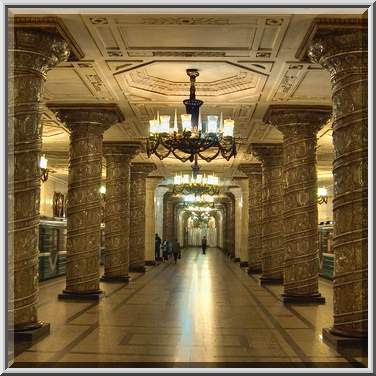 Recently we had a series of articles about Moscow Metro (part1, part2, part3). Our reader Ludmila sent us a link to a beautiful movie about St. Petersburg Metro. Let’s watch it together!

Thank you Ludmila, you always help us with great information!

And what beautiful metro (subway) has impressed you? Send us information and we’ll publish it.

You want know more about St.Petersburg’s Metro, you always can find an article in Wikipedia!

Saint Petersburg’s unforgiving geology has frequently hampered attempts by Metro builders. The most notable case took place on the Kirovsko-Vyborgskaya Line. While constructing the line in the 1970s, the tunnelers entered an underground cavity of the Neva River. They managed to complete the tunnel, but in 1995 the tunnel had to be closed and a section of it between Lesnaya and Ploshchad Muzhestva flooded. For more than nine years, the northern segment of the line was physically cut off from the rest of the system. A new set of tunnels was built and in June 2004 normal service was restored.
============================================