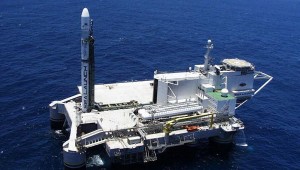 A Russian booster rocket has blasted off from the Odyssey launch pad in the Pacific Ocean as part of the Sea Launch project to deliver a U.S. satellite into orbit, a spokesman for Energiya space corporation said on Sunday.

Odyssey, positioned on the equator, is a converted oil rig operated by the Swiss-based rocket company Sea Launch.

The initial launch of the spacecraft was scheduled for August 15 but it was postponed several times due to various reasons.