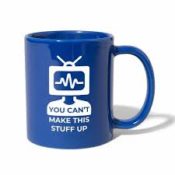 Everything that the USA does and wants to do is always in hidden in full view. The reason we do not see the plans of attack are because we Americans are way to occupied to care; occupied by our own physical/financial/chaotic country and occupied by the constant barrage of propaganda 24 hours a day…

To understand you must look, see and read what is being put out. That is the problem; we only see what is controlled played across the screens of our life. Use to be TV and now Smartphones!

I found it very much like a 1940s foreign-policy report by ex-US ambassador to the Soviet Union, George Kennan. Another propaganda and misplaced policy report…

This is the, “We (USA) are good and Soviets are evil” report:

The new fear mongering paper about China in a nutshell says:

1. Promoting the (US) home front in various factors.
2. Building and keeping the world’s strongest military at all odds.
3. Enforcing the USA way upon international order.
4. Changing US allies.
5. Creating, changing the USA international organizations to promote USA style democracy and human rights.
6. Being nice with China when possible and not nice with China when the USA decides it is necessary.
7. Propaganda spread in Americans about the Chinese and the Chinese want for power.
8. Install within the US government system a new line of thinking about containing China.
9. Revamp the US public education system to make the youth in America fear the rest of the world
10. Propaganda spread about how the USA is based upon the principles of freedom in not just its word but in its deeds also.

This site, WtR, has always told it like it is. WtR is constantly attacked because I do not sugar coat and just tell it like it is…

The USA system writes things like these reports because of fear, warmongering and desire to rule the world in whatever form they see is proper. This is basically a USA psychosis, most other countries are very happy to get along in the world and if they don’t it is a border contained issue…

Empires, especially Empires that transplanted from one failed British Empire to the new American (Western) Empire. Will do anything to stay afloat and damned to the rest of the world…

Power does not corrupt. Fear corrupts. Perhaps the fear of a loss of power. — John Steinbeck