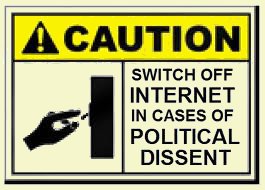 MOSCOW, January 20 (Itar-Tass) — No Internet censorship will be imposed in Russia, Communications Minister Igor Shchyogolev assured in his article published in the Vedomosti newspaper site on Friday. In the article, he commented on the scandal bill under consideration in the United States on protection of intellectual property in the Internet (SOPA).

Major Internet representatives Google, Facebook, Yahoo, Twitter, Mozilla and eBay oppose the bill, according to which, any participant in Internet activities, from providers to searchers and even advertisers, at any request of the right possessor, must stop cooperation and not to provide services for the resource accused of piracy. Moreover, the draft law allows blocking sites in the United States and any resources to which the country’s citizens have access. It is 99 percent of the entire Internet.

The SOPA adoption will not only have a negative effect on the development of the Internet as a business space, but in fact can become an instrument of censorship, which is contrary to democratic principles, Shchyogolev noted.

All proposals on the on-line space, protection of the interests of right possessors or fight against children pornography are discusses with Internet experts, he said. It is impossible to block or censor the Internet, otherwise it will lose its essence, he noted.

The Internet is freer in Russia than in the West, the minister believes.

There is a view that the Russian government allegedly seeks to have more state control over the Internet. But the possibility to block the access to Twitter or Facebook in case of social unrest is even not considered in the country, while some European countries have openly said they will use the measure.

All states together should regulate the global network, Shchyogolev said. Not all countries are ready to sign such a convention on the Internet space as a legally-binding document.

States that will join the code of behavior will assume obligations to cooperate in the fight against criminal and terrorist activities with the use of informational telecommunication technologies, including networks, the minister said.